On July 16th, 2019, the United States Capitol Historical Society (USCHS) hosted an event to honor the 116th Congress in National Statuary Hall. Every two years, the USCHS commemorates the Congress with an educational program and reception. This year, Society members, staff, and volunteers joined current and former members of Congress and Congressional staff to learn about the “dirty, nasty, politics” of early American government.

The U.S. Capitol Police Ceremonial Unit presented the nation’s colors and USCHS President/CEO Jane L. Campbell led the Pledge of Allegiance to begin the program. To introduce the evening’s first speaker,  Ms. Campbell noted that as the first woman to serve as Speaker of the House, Nancy Pelosi has a record of “making history every day.” Recalling some of Speaker Pelosi’s legislative achievements, Ms. Campbell highlighted the passage of both the landmark Affordable Care Act and the Lilly Ledbetter Fair Pay law, as well as the repeal of the military policy of “Don’t Ask, Don’t Tell.” In her remarks, Speaker Pelosi commented on the importance of history and the balance of managing the diverse group of personalities and perspectives in Congress while also acting on behalf of constituents.

When introducing the program’s second speaker, Senator Todd Young of Indiana, Ms. Campbell noted that since he was first elected to the House in 2010 and then to the Senate in 2016, he has been involved in legislative efforts to improve care for veterans, protect the Great Lakes, and support the growth of small businesses. In his remarks, Senator Young acknowledged the 50th anniversary of the launch of the Apollo 11 Mission – the first to land on the moon – and noted the role of Congress in authorizing and funding the Apollo Program.

Congresswoman Debbie Dingell, who represents Michigan’s 12th Congressional district, was the third speaker of the evening. In her introduction, Ms. Campbell noted that Congresswoman Dingell has been an advocate of women’s issues, a civic and community leader, and the founder and past-chair of the National Women’s Health Resource Center. In remembrance of her late husband, former Congressman John Dingell, the Congresswoman shared stories about her husband as a young page in the Capitol and described the importance of the friendships that their family had made across party lines.

In her keynote address Dr. Joanne B. Freeman, a decorated author and Professor of History and American Studies at Yale University, addressed the rich and at times turbulent history of early American politics. Dr. Freeman first assured the room that today’s political climate is not as grisly as the political climate of the antebellum congresses and their “physically violent clashes” that occurred in both the House and the Senate chambers. Dr. Freeman explained the significance of holding the event in National Statuary Hall, which as the House Chamber from 1807 until 1857 played host to not only many brawls, but also necessary conversations about what it meant to create a “national we.”

C-SPAN was on hand to record the program; you can view their recording here.

The event was made possible thanks to the generous support of the National Association of Realtors. 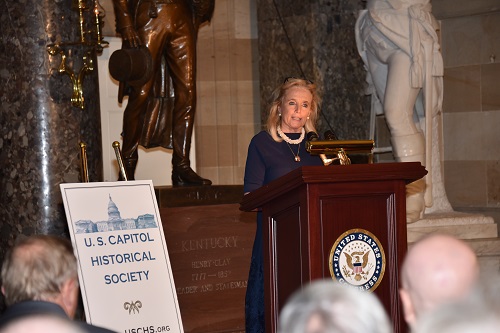