On the evening of May 11, in National Statuary Hall, U.S. Capitol, the U.S. Capitol Historical Society gathered to present the 2016 Freedom Award to David McCullough in recognition of his empathetic, nuanced, and fundamentally human approach to telling the American story. With unmatched voice and vibrancy, Mr. McCullough enhances our understanding of the lives and times of the extraordinary people who have shaped our nation. In so doing, he inspires the informed citizenship that is the foundation of true freedom.

The U.S. Capitol Historical Society annually recognizes individuals that have advanced greater public understanding and appreciation for freedom as represented by the U.S. Capitol and Congress. The Society initiated its Freedom Award on September 17, 1993, the eve of the 200th anniversary of the laying of the U.S. Capitol Cornerstone by George Washington in 1793. It is named for the statue that graces the Capitol’s dome.

Other speakers included The Honorable E. Thomas Coleman, Chairman of the US Capitol Historical Society, and The Honorable John B. Larson, co-Chair of the Congressional History Caucus, who presented Mr. McCullough with a flag flown over the Capitol in honor of this event.

Mr. McCullough engaged the crowd with a never-before-heard speech he researched specifically for this event. The crowd listened intently as Mr. McCullough brought history to life! Standing in National Statuary Hall, the guests learned of the history and lasting legacy of this room, the original House of Representatives.

It was truly a night of history in the making, in a room where so much history had come before it. In the words of Mr. McCullough, “On we go.” Mr. McCullough was joined by his wife Rosalee and several members of his family.

USCHS would like to thank:
Mallinckrodt Pharmaceuticals
CoBank
Airlines for America
Bank of America
The Home Depot.

The Freedom Award Ceremony on C-SPAN 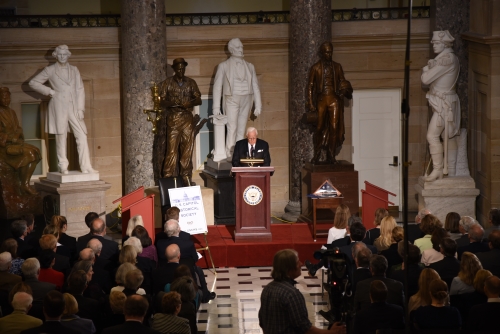