The U.S. Capitol Historical Society hosted the 2018 installment of its annual scholarly symposia series on Friday, May 4. Scholars from across the country joined a local audience (and a C-SPAN crew) to discuss the early Reconstruction era, including the Fourteenth Amendment’s passage and impact, the impeachment of Andrew Johnson, widows in the black public sphere, and Rep. James Ashley.

Reconstructing the Constitution, Remaking Citizenship, and Reconsidering a Presidential Succession opened with a morning session centered on the Fourteenth Amendment. Vernon Burton (Clemson University and the University of Illinois Urbana-Champaign) began the session by exploring some of the reasons for and effects of the passage of the Fourteenth Amendment. Then a panel of three speakers took on more specific questions about the amendment and citizenship. Paul Finkelman (Gratz College) discussed the way the amendment resolved some questions about who was considered a citizen and effectively reversed the Dred Scott decision. Jack Chin (UC Davis School of Law) analyzed certain ways that the amendment did not apply to all—it was long interpreted as offering citizenship only to black Americans and not, for instance, to Chinese immigrants and their children. Alysa Landry (journalist and doctoral student at Gratz College) discussed the ways this issue of who can be a citizen played out for Native Americans around and since the time of the Fourteenth Amendment’s passage.

Brandi Brimmer (Morgan State University) opened the afternoon session and continued the conversation about citizenship as she examined the lives of black Union widows who applied for pensions after the Civil War. Their survivor’s benefits depended on an agreement that they and their Union soldier husbands were citizens; their benefits and status as citizens also turned on questions about their marital status and sexuality in a way that men’s pensions did not. Next, Rebecca Zietlow (University of Toledo College of Law) discussed Rep. James Mitchell Ashley, an anti-slavery politician who also supported increased rights for “free” (white) labor and a more egalitarian version of liberty that addressed both racial and economic discrimination. Mark Summers (University of Kentucky) gave the final presentation, a lively history of the Andrew Johnson impeachment in which he argued that while Johnson remained in office, the impeachment effort was enough to effectively neutralize him.

You can find out more about our speakers’ backgrounds on the symposium announcement page. Most of the talks from the symposium have been or will soon be aired on C-SPAN. Check back here for links or search for “Capitol Historical Society” on c-span.org for all our programs! And please scroll down to see pictures from the event.

Orville Vernon Burton, Clemson University and University of Illinois Urbana-Champaign
“Origins of the Fourteenth Amendment, Cornerstone of the New Birth of Freedom during the Long Civil War”

Mark Summers, University of Kentucky
“The Taming of Andrew Johnson”

Panel with all speakers: Final Q&A 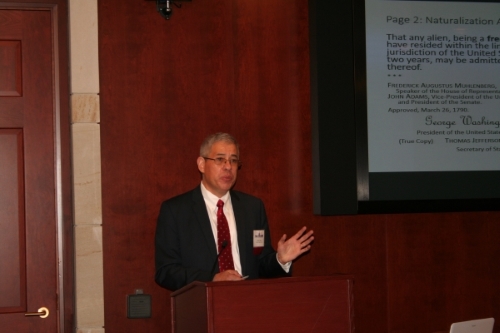