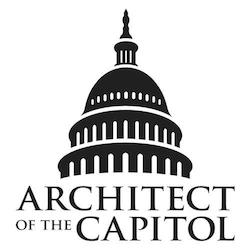 On the evening of Wednesday, November 28th, 2018, the United States Capitol Historical Society will present its annual Freedom Award to the Office of the Architect of the Capitol in recognition of its ongoing mission “to serve the Congress and the Supreme Court, preserve America’s Capitol, and inspire memorable experiences” for all who encounter our Temple of Democracy. Christine Merdon, PE, CCM, acting Architect of the Capitol and Chief Operating Officer, will be accepting the award on behalf of the organization.

As one of the most iconic buildings in the world, the United States Capitol is both an exceptionally busy workplace and a treasured historic site. The Architect of the Capitol achieves the extraordinary task of ensuring that the home of Congress operates as a functional space that is also welcoming to the public. This agency has carried on the living legacy of the Capitol Building from its original 1793 design by Dr. William Thornton through its construction, additions, and conscientious preservation. Every day, the more than 2,000 employees of the Architect of the Capitol are responsible for the maintenance and care of the historic buildings and grounds of the Capitol Complex, the preservation of art and monuments contained therein, and the hosting and education of the more than 3 million visitors the Capitol receives annually.

The ceremony is expected to draw many Members of Congress,  including Representatives Debbie Wasserman Schultz of Florida and John Larson of Connecticut, who also serves as a member of the USCHS Board of Trustees and is the Co-Chair of the Congressional History Caucus. With the presence of Ms. Merdon, the Honorable Alan Hantman, FAIA, 10th Architect of the Capitol, and the Honorable Stephen Ayers, FAIA, CCM, LEED AP, 11th Architect of the Capitol, there will be three Architects of the Capitol in attendance. The ceremony will also feature dignitaries from the University of Aberdeen in Scotland — which was Dr. Thornton’s alma mater — USCHS members, and other distinguished guests.

The evening’s festivities will also include the unveiling of Mr. Ayer’s official portrait. During his tenure as the most recent Architect of the Capitol, Mr. Ayers oversaw the completion of the U.S. Capitol Visitor Center, the thorough restorations of the Capitol Dome and Ulysses S. Grant Memorial, the repair and treatment of the buildings’ stone façades, the improvement of energy efficiency and minimization of emissions from the complex, and the beginning of the Cannon House Office Building renewal project. If you would like to make a contribution to the U.S. Capitol Historical Society Fellowship Fund in honor of Mr. Ayers, please visit this webpage. We will include a list of all donors who made gifts in his honor before November 26th in the memento we present to him during the ceremony.

Admission to the event will be by invitation only. Current USCHS members at and above the Cornerstone Society level will be invited to the ceremony. If you are not sure whether your membership is current, please call the Society at (202) 543-8919 and ask to speak with the Membership Department.

About the Freedom Award

The United States Capitol Historical Society created its Freedom Award to recognize and honor individuals and organizations that have advanced greater public understanding and appreciation for freedom as represented by the U.S. Capitol and Congress. The Freedom Award was first presented on September 17, 1993, the eve of the 200th anniversary of the laying of the U.S. Capitol cornerstone by George Washington in 1793. This award, named for the statue that graces the Capitol’s Dome, is presented annually in recognition of the dedication of recipients to freedom, democracy, and representative government.