We the People Program

Enhancing Civics Teaching & Learning The We the People Constitution Program engages thousands of students with an exploration of how the U.S. Constitution is alive in Washington, DC.

U.S. Capitol Historical Society3 days ago
#OTD in #History, two amendments to the #USConstitution were ratified. First, in 1870, the 15th Amendment granted voting rights to all male citizens, regardless of race. Then, in 1913, the 16th Amendment authorized the Federal Government to levy an income tax.

Following the #CivilWar, the 13th & 14th Amendments abolished slavery and guaranteed Blacks citizenship. "Radical Republicans" in #Congress also passed a law requiring former Confederate states to enfranchise Black men. This law, however, was ignored as GOP voters of all races were murdered and threatened by domestic terrorism.

But despite violent repression in the South, Ulysses S. Grant won the Presidency in 1868, aided by widespread support from Blacks. Afterward, the GOP came together to pass a suffrage amendment in Congress.

To pay for the Civil War, Congress also imposed an income tax. However, it was repealed in 1872, again making tariffs the main source of federal income. Manufacturers flourished, but farmers who relied on expensive, manufactured exports struggled. As a result, a growing populist movement advocated for a progressive income tax. The tax, the 1892 Populist Party platform said, would “restore the government of the Republic to the hands of the ‘plain people’ with which class it originated.”

Democrats adopted this idea, and in 1894, passed a 2% tax on income over $4,000. #SCOTUS, though, ruled it unconstitutional: the Federal government could only levy a direct tax if it were apportioned among the states. More than a decade later, this decision was negated by the 16th Amendment.

As #ThomasJefferson wrote, “Let us go on then perfecting it, by adding by way of amendment to the constitution, those powers which time & trial shew are still wanting.”

US Capitol Historical Society · 3 days ago
@CapitolHistory
#OnThisDay in #history 1913, the 16th Amend allowed the Gov to levy income taxes, a step toward making the #USA among the wealthiest nations. Also #OTD, in 1870, the 15th Amend granted suffrage to all male citizens, regardless of race, a step toward making the US among the freest https://t.co/gkvYGm0gf6
View on Twitter 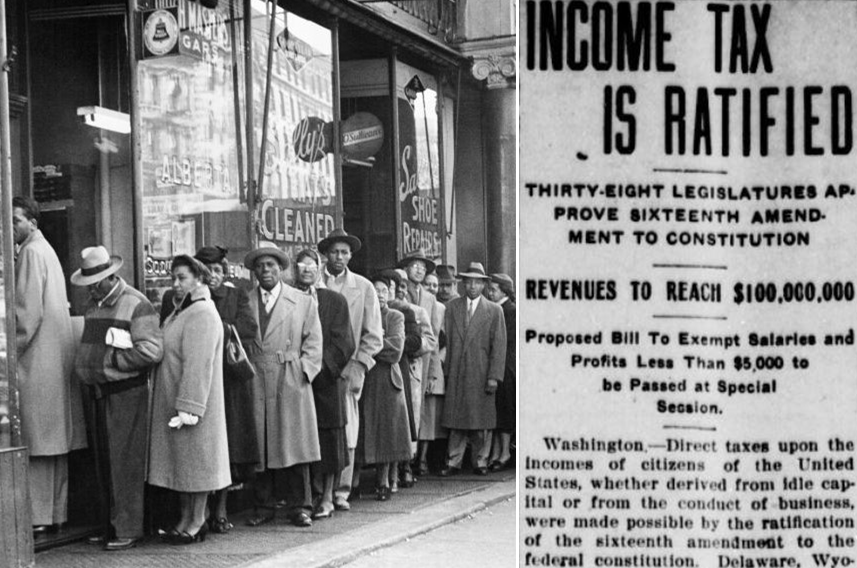